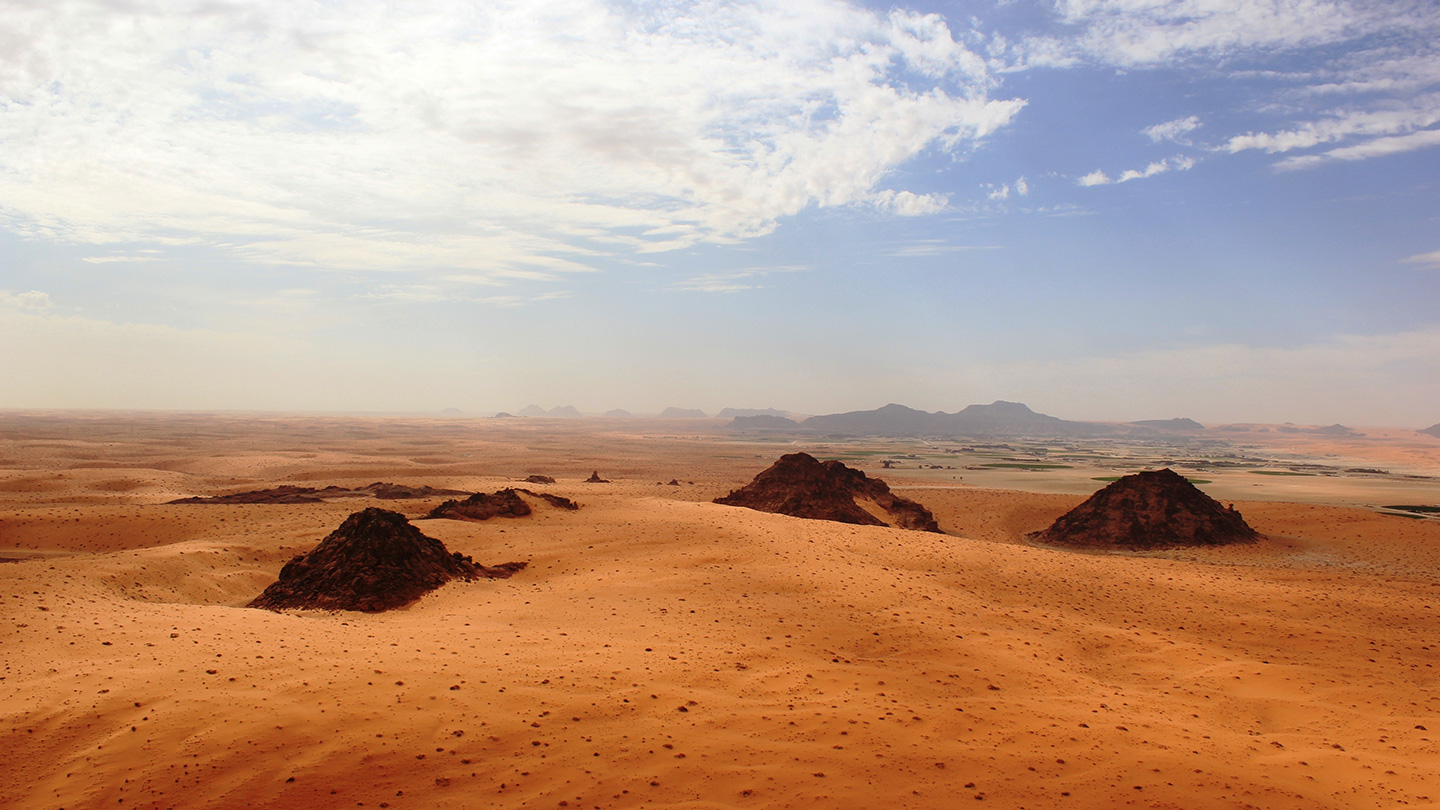 By Bruce Boitnott on 6th September 2021


Arabia, known today for its desert landscape, served as a “green turnstile” for migrating Stone Age members of the human genus starting around 400,000 years ago, a new study finds.

Monsoon rains periodically turned northern Arabia into a well-watered oasis, creating windows of opportunity for long-ago humans or their relatives to trek through that crossroads region from starting points in northern Africa and southwest Asia.

That’s the implication of a series of five ancient lake beds of varying ages, each accompanied by distinctive stone tools, unearthed at a northern Saudi Arabian site called Khall Amayshan 4, or KAM 4. Sediments from the lake beds, which were linked to periods when the climate was wetter than today, also yielded fossils of hippos, wild cattle and other animals. Like hominids, those creatures must have migrated into the region along rain-fed lakes, wetlands and rivers, an international team reports online September 1 in Nature.

Until now, the oldest stone tools in Arabia dated to at least 300,000 years ago (SN: 11/29/18). Previous finds only hinted that Stone Age Homo sapiens or other Homo species temporarily inhabited green, wetter parts of Arabia, a conclusion largely resting on discoveries at two other Saudi sites, each preserving stone tools from a single point in time (SN: 11/1/18).

Aside from providing the earliest known evidence of hominids in Arabia, the new finds demonstrate for the first time that ancient Homo groups traveled there when conditions turned wet, say archaeologist Huw Groucutt of the Max Planck Institute for the Science of Human History in Jena, Germany, and colleagues.

The number, completeness and time frames of KAM 4’s ancient lake deposits make this site “one of a kind … that will continue to produce remarkable results,” says archaeologist Donald Henry of the University of Tulsa in Oklahoma, who did not participate in the new study.

But each phase, dated mainly by a technique that estimated the amount of time since grains of lake sediment had last been exposed to sunlight, had its own evolutionary character.

For example, the identity of the KAM 4 crowd 400,000 years ago, who left behind large hand axes, is unclear, but the researchers know it couldn’t have been H. sapiens. Our species didn’t originate until roughly 300,000 years ago in Africa (SN: 6/7/17). One possibility is that those ancient Arabians represented a now-extinct Homo population from southwest Asia that later migrated into Africa, possibly contributing to H. sapiens evolution, Groucutt speculates.

Similar but slightly smaller, more finely worked hand axes turned up along the shore of a roughly 300,000-year-old KAM 4 lake bed, indicating a second phase of occupation. Groucutt and colleagues doubt that early H. sapiens from Africa scurried over to KAM 4 in time to make those tools. Whichever Homo group did could have come either from northern Africa or southwest Asia, the researchers say.

A third round of KAM 4 occupants, probably H. sapiens, fashioned artifacts excavated at an approximately 200,000-year-old lake bed, Groucutt says. These finds consist of rock chunks shaped so that sharp flakes, also unearthed there, could be pounded off. Humans based in northeastern Africa around that time made similar tools. Some of those people may have reached Arabia before eventually journeying to southwest Asia, Groucutt suggests.

Groucutt’s group excavated comparable tools at a site called Jubbah about 150 kilometers east of KAM 4 that date to around 210,000 years ago. Those finds are another sign of human migrations into Arabia at a time when the corresponding KAM 4 lake bed shows that wet conditions reigned. Additional stone tools unearthed at Jubbah date to around 75,000 years ago.

Stone implements resembling the Jubbah finds were also excavated at the youngest two KAM 4 sites, one dating to between about 125,000 and 75,000 years ago and the other to roughly 55,000 years ago. The older site likely hosted H. sapiens, possibly a group that left Africa, Groucutt suggests.

The youngest KAM 4 artifacts could represent either H. sapiens or Neandertals, he says. Neandertals reached the Middle East by about 70,000 years ago and could have reached a green Arabia by 55,000 years ago. If so, Neandertals may have interbred with H. sapiens in Arabia, a possibility not raised before.

Despite uncertainties about which hominids reached KAM 4 during its green phases, KAM 4 tools generally look more like similarly aged African tools than artifacts previously found in southern Arabia or at eastern Mediterranean sites, says Henry, the University of Tulsa archaeologist. Migrations out of Africa, he says, now appear more likely to have wended through northern Arabia rather than across a narrow Red Sea crossing to southern Arabia, often regarded as a major dispersal route for ancient humans.