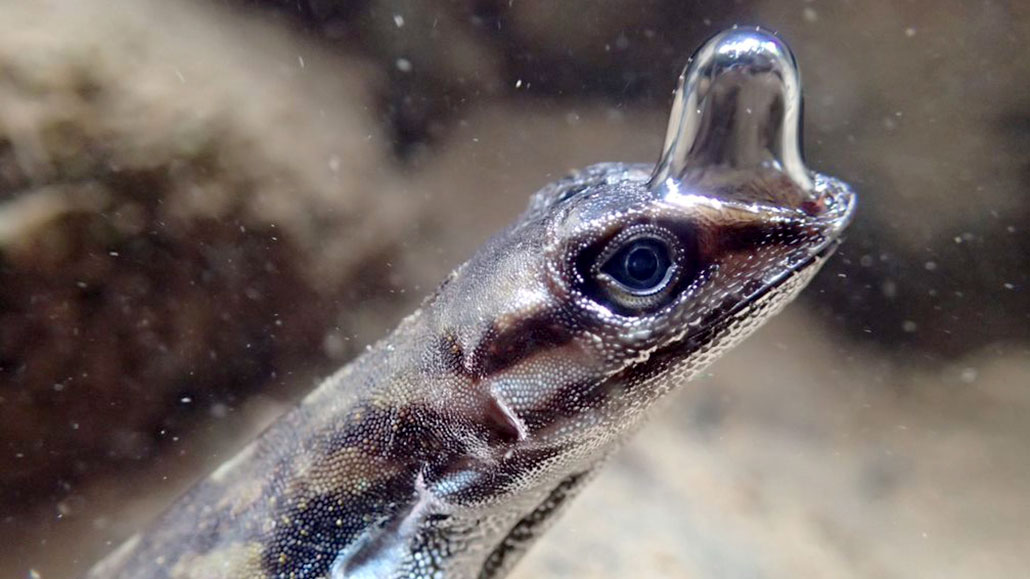 How some lizards breathe underwater


Some anole lizards have a newfound superpower: They can breathe underwater by trapping air in a bubble on their snouts. What’s more, these reptiles can stay submerged for nearly 20 minutes by rebreathing exhaled air in the bubble, a new study shows.

“As anyone who has encountered one of these lizards can tell you, they dive underwater when they feel threatened,” says evolutionary biologist Chris Boccia of Queen’s University in Kingston, Canada. But how the lizards stay underwater for so long had been a mystery until now.

Boccia was inspired to investigate by a story one of his professors told him when he was a student at the University of Toronto. In 2009, evolutionary biologist Luke Mahler had been studying an endangered species of Anolis lizard in Haiti. After releasing a lizard back into a clear, shallow stream, Mahler noticed something odd. As the animal clung to the rocky bottom, it exhaled an air bubble on its snout and appeared to repeatedly suck the air in and out of the bubble. Mahler had to move on to his next research site so he couldn’t explore more. But years later, he still remembered the bubble-headed lizard.

Boccia and colleagues traveled to Costa Rica in 2017 in search of bubble-headed anoles, capturing the creatures at night. “Doing this when they’re sleeping makes things less stressful for them,” Boccia says. It’s also “easier for us to catch them.”

Wearing head lamps to find the lizards in the dark, the researchers collected 300 anoles representing a range of species — 120 lizards were found near streams and 180 were found away from streams. Back at their camp, Boccia and colleagues gently dunked each lizard in containers of river water.

While underwater, all of the anoles carried a bubble of air around their snouts and appeared to breathe the bubble in and out. But river-based lizards rebreathed more often and stayed submerged longer than their land-based relatives, Boccia, Mahler and colleagues report in the July 12 Current Biology.

“One lizard was underwater for 18 minutes,” Boccia says. “We were starting to get worried about him.”

Anoles’ water-repelling skin might play a role in forming the bubbles. As the reptile dives into the water, a thin layer of air may get trapped against that skin. When the lizard exhales, air exits through the nostrils and expands the trapped air layer. In that way, the lizard might use its lungs to control the bubble’s size.

If a lizard rebreathed the air in those bubbles, then the bubbles’ oxygen levels should drop over time. Inserting a small oxygen sensor into bubbles around submerged lizards’ snouts confirmed that the oxygen levels slowly dropped as the lizards breathed.

To stay submerged for long periods, the anoles may slow down their metabolism, reducing the need for oxygen, Boccia suspects. And as oxygen levels in the bubble drop and CO2 levels rise, the bubble may rebalance the levels by shedding CO2 into the water and uptaking dissolved oxygen, he says.

The findings highlight how different animals have evolved to live in water, says evolutionary biologist Jonathan Losos of Washington University in St. Louis who wasn’t involved in the research. “Species that experience the same challenge in nature often find different ways to overcome it,” Losos says. “Fish use gills to extract oxygen from the water. Whales are able to hold their breath for a long time. And now we know that these lizards take oxygen underwater with them.”

Both Boccia and Mahler hope to continue studying this newfound behavior. “There are so many different types of lizards, there is a good chance that others do it too,” Boccia says. “We just haven’t seen it.”