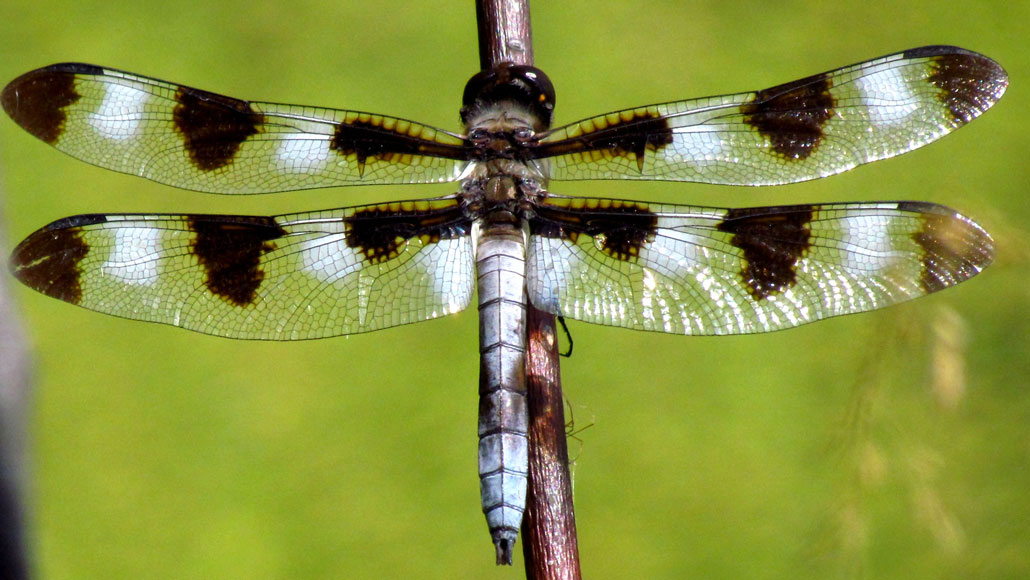 
Many dragonflies zip through the air with their translucent wings painted in an array of dark spots and bands. But — for males at least — those dapper decorations could soon fall out of style as a result of climate change.

Males’ dark wing patches are smaller in dragonflies of a given species that live in warmer climates than in cooler regions, researchers report in the July 13 Proceedings of the National Academy of Sciences. That finding suggests that dragonfly populations over time may experience their spots shrinking as temperatures rise. The evolutionary change may not only dampen the male insects’ flair, but also their dating life.

Understanding how organisms have adapted to warmer climates over the years is key to understanding how they may adapt to future climate conditions, says Michael Moore, an evolutionary ecologist at Washington University in St. Louis.

Heavy wing pigmentation can help dragonflies stay warm in chillier regions, but could be dangerous in hotter weather. The dark spots absorb sunlight and can heat wings by as much as 2 degrees Celsius, which may cause tissue damage and interfere with flight, Moore says. Tossing or shrinking the spots is a way to beat the heat, and could result in a color shift response to climate change among dragonflies akin to owls (SN: 7/11/14) and hares (SN: 1/26/16). But the adaptation could also garble communication with mates.

Male dragonflies use wing spots to attract mates and intimidate rivals, and females rely on those spots to recognize potential mates of the same species. The markings differ greatly among species, ranging from small speckles near the wing’s base to extensive bands or panels spread across the entire wing.

Most organisms, Moore says, “don’t just need to survive in order to persist and perpetuate their species within the habitats they live in, they also have to be able to reproduce.”

He and colleagues compiled a database of dragonfly wing patterns from a combination of field guides and many thousands of observations from citizen scientists across North America on the nature identification app iNaturalist. The researchers found that male dragonflies from species found in warmer regions were less likely to have evolved wing spots than their cool climate counterparts.

To explore out how fast these color patterns could evolve, Moore and his team selected 10 species and compared wing spots on dragonflies from warmer and cooler regions of a species’s range. That way, the team could see if spot patterns within an individual species can adapt to local climatic conditions, which would be a faster evolutionary response than between different species. Where it was warmer, males in seven of the 10 species have evolved to have wings with fewer and smaller dark spots, the team found. The changes even appear to occur on the scale of decades: Male dragonflies in the warmest years from 2005 to 2019 had the smallest wing spots on average.

That change could have alarming consequences for the insects. “It’s not hard to imagine that really rapid declines in wing coloration might cause females to not recognize males of their own species,” Moore says.

Most research to date on insect color and climate change has focused just on heat tolerance, says Lauren Buckley, an ecologist at the University of Washington in Seattle who was not involved with the study. “This research reveals the value in examining multiple, competing functions of traits.” Seeing how changes in the spots affects all of the jobs that they do is important, Buckley says.

Dragonflies frequently move in and out of areas near water that may have very different temperatures, so future research could “better account for how dragonflies experience their environments,” she says.

Unlike males, wing spots on females don’t appear to respond to temperature, which was surprising, Moore says. It’s possible the females’ more regular use of shaded habitats blunts the effect of higher temperatures.

That finding “indicates that we should not assume necessarily that males and females are going to adapt to climates in exactly the same way,” Moore says. “That has really big implications for how we think about modeling and forecasting responses to future climates.”

For now, Moore says, he wants to get an estimate of just how much wing spot changes could disrupt the dragonflies’ dating game.