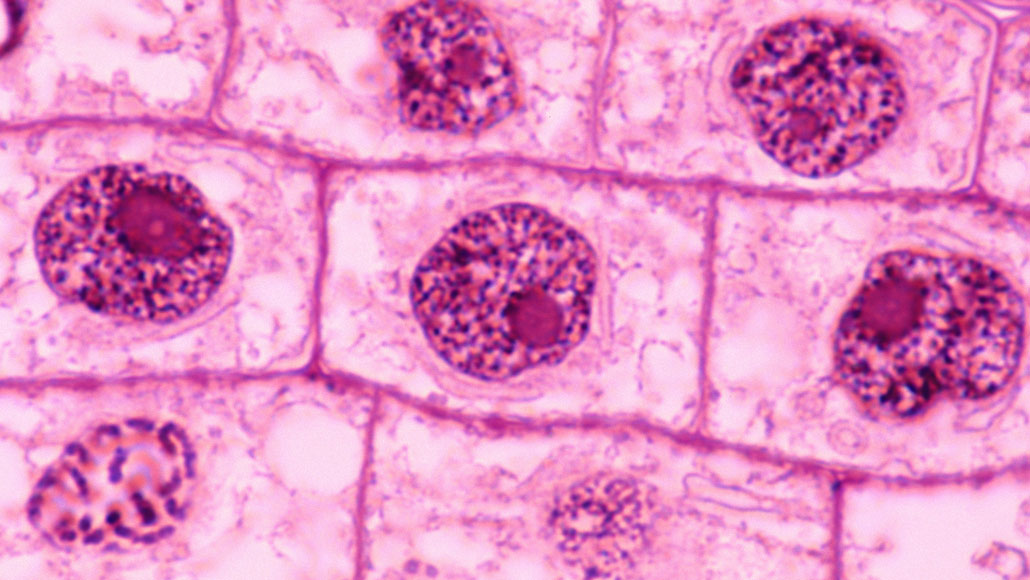 Cells cram DNA into the nucleus in two distinct ways

There are only so many ways to cram DNA into a cell’s nucleus, a study suggests.

A cell’s complete genetic blueprint, or genome, is densely packed into chromosomes, condensing meters of DNA into a minuscule cellular vessel only micrometers wide (SN: 8/24/15). But how chromosomes fold to fit inside the nuclei of diverse species is unclear.

There appear to be two methods to stuff all of that DNA in, researchers report in the May 28 Science. Cells can even flip-flop which arrangement they have by inactivating a molecule called condensin II, the team found.

If chromosomes were pieces of paper, some, like those of humans, would look like a crumpled ball inside the nucleus, says Claire Hoencamp, a molecular biologist at the Netherlands Cancer Institute in Amsterdam (SN: 10/8/09). Others, like those of fruit flies (Drosophila melanogaster), resemble flat sheets of stacked paper.

In the new study, Hoencamp and colleagues created heat maps that analyzed how chromosomes in the nuclei of 24 animal, plant and fungal species interacted inside their respective cells. The maps show the average number of connections among chromosomes in a cell’s nucleus — revealing how the genetic molecules fold — “on the scale from white to red,” says Olga Dudchenko, a genomicist at Baylor College of Medicine in Houston. “The more red, the more interactions. The less red, the less interactions.”

Throughout evolutionary history, organisms across the tree of life have switched among different packing methods, the researchers found. “We worked with a zoo of species, and [at first] it looked like a zoo of patterns of genome folding,” Dudchenko says. “Some maps would look like a checkerboard pattern. Other ones would look like a mattress with weird x’s.” Over time, it became clear that many of the same chromosome folding features were popping up again and again in different species.

Crumpled ball-like chromosomes, like those of the red piranha (Pygocentrus nattereri), sport a fourth type of interaction. In those structures, a chromosome folds in on itself in a tangle rather than touching other chromosomes, resulting in large red squares on the heat maps.

Breaking parts of condensin II — a complex of proteins that helps assemble chromosomes as cells divide — can switch which organization a nucleus has. Tweaks to condensin II can make a crumpled human nucleus look like a folded fly’s nucleus, the team found. But some organisms have stacked sheets despite having intact condensin II. That means there may be other factors researchers haven’t yet found that push cells to cram chromosomes into the nucleus in a specific way, Hoencamp says.