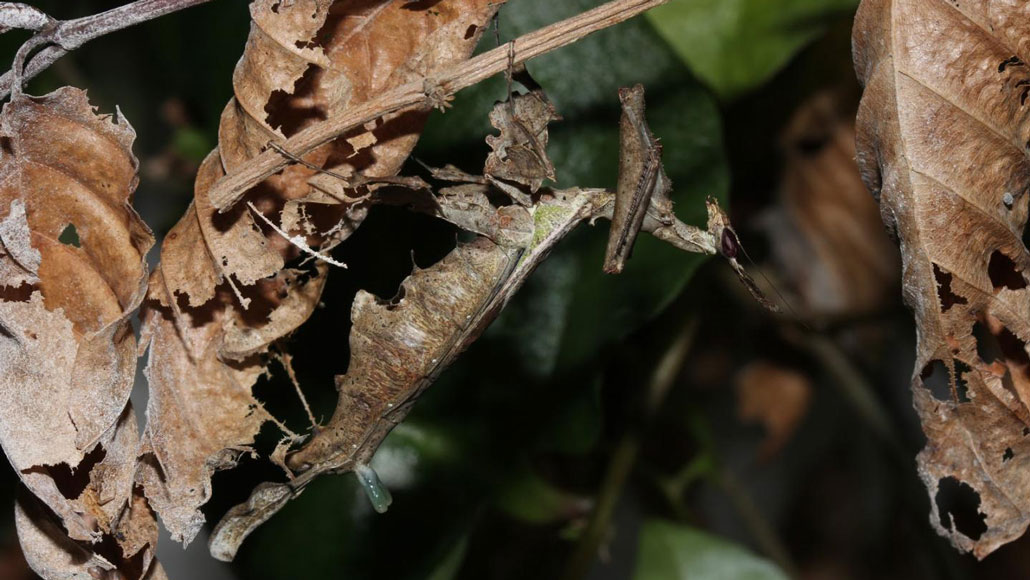 
Praying mantises — with their angular features, huge eyes and centaur posture — often seem a bit alien. But researchers have recently found one mantis species that takes this otherworldly quality to the next level: Females of this species have an inflatable pheromone gland that protrudes from the back of the abdomen like a green, Y-shaped balloon.

This odd organ is unlike anything seen in mantises before, researchers report online April 21 in the Journal of Orthoptera Research.

In October 2017, herpetologist Frank Glaw was moving through the nighttime rainforest in Amazonian Peru at the Panguana research station, searching for amphibians and reptiles. His flashlight passed over a brown, leaf-mimicking mantis (Stenophylla lobivertex) in the tangle of vegetation, and he saw “maggotlike” structures protruding from its back. Those structures were quickly sucked back inside the insect after the light hit it, says Glaw, of the Bavarian State Collection of Zoology in Munich, Germany.

Glaw was reminded of “parasites that eat the animal from the inside,” having seen such fatally parasitized insects before. With the help of Christian Schwarz, an entomologist at Ruhr-University Bochum in Germany, and observations of some female specimens in captivity, the team figured out that the mantis was no parasite-riddled vessel.

When left undisturbed in total darkness, the female mantises extrude a pronged structure inflated with body fluids, roughly the hue and luster of polished jade. It appears to be a highly modified gland for producing pheromones — chemical signals that help female insects attract mates (SN: 5/13/15).

Other mantises have simple, noninflatable glands that are located in the same section of abdomen as S. lobivertex’s bifurcated contraption.

This mantis species is rarely encountered by researchers and might be thinly spread throughout the rainforest, so locating receptive mates could be particularly challenging. The researchers think a large, protrusible pheromone gland with lots of surface area could be a workaround, more efficiently dispersing pheromones to be detected by the antennae of would-be suitors.

“It is a kind of chemical ‘dating app’ in the jungle,” says Glaw, noting that the observations “emphasize the importance of pheromones in [the mantises’] reproduction in a vivid manner.”

Females in some other mantis species are known to expose a pink, patchlike gland when doing their chemical call for mates, says Henrique Rodrigues, an entomologist at the Cleveland Museum of Natural History who was not involved with this research.

“I can easily see something like that being the precursor of the protrusible gland,” says Rodrigues. He notes that since males have thin, hairlike antennae, “the other way to increase the odds of mate finding would be for females to increase the amount of pheromone released.”

Glaw thinks it’s likely that similar glands might exist in the other two species of Stenophylla, and possibly other mantises. “If this organ is really an important tool to improve the finding of mates,” he says, “it would be an advantage for many other mantis species as well and might be more widespread.”