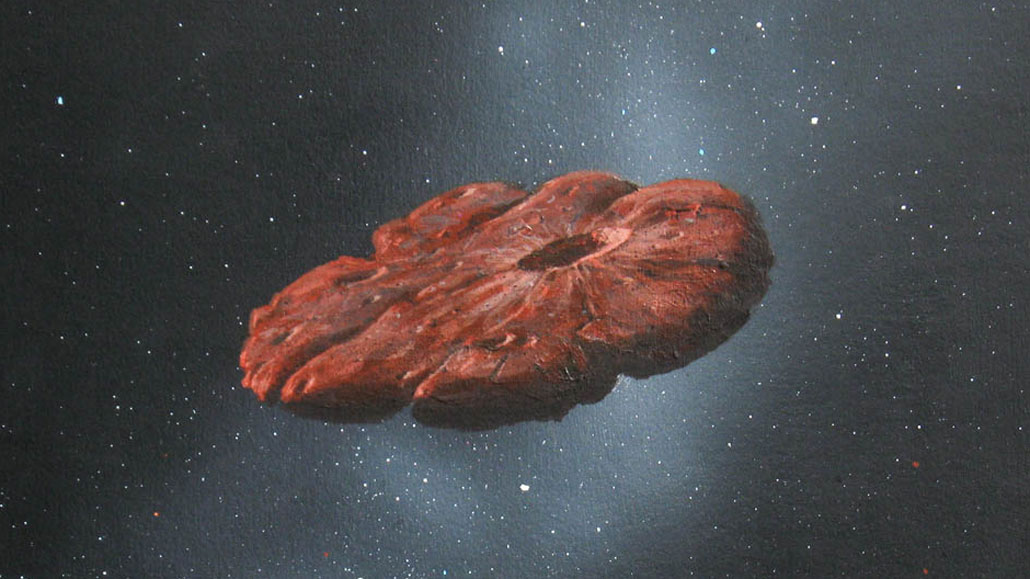 ‘Oumuamua may be a chip knocked off an icy, Pluto-like exoplanet


Since its discovery, the interstellar object known as ‘Oumuamua has defied explanation. First spotted in 2017, it has been called an asteroid, a comet and an alien spaceship (SN: 10/27/17). But researchers think they finally have the mystery object pegged: It could be a shard of nitrogen ice broken off a Pluto-like planet orbiting another star.

“The idea is pretty compelling,” says Garrett Levine, an astronomer at Yale University not involved in the work. “It does a really good job of matching the observations.”

‘Oumuamua’s origin has been a mystery because it looks sort of like a comet, but not quite (SN: 12/18/17). After whipping by the sun, ‘Oumuamua zoomed away slightly faster than gravity alone would allow. That happens when ices on the sunlit sides of comets vaporize, giving them a little rocketlike boost in speed. But unlike comets, ‘Oumuamua didn’t appear to have a tail from typical cometary ices, such as carbon monoxide or carbon dioxide, streaming off it.

Alan Jackson and Steven Desch, planetary scientists at Arizona State University in Tempe, set out to discover what other kind of evaporating ice could give ‘Oumuamua a big enough nudge to explain its movement. The pair reported their results March 17 at the virtual Lunar and Planetary Science Conference and in two studies published online March 16 in the Journal of Geophysical Research: Planets.

The amount of force that a vaporizing ice exerts on a comet depends on factors such as how much the ice heats up when it absorbs energy, the mass of its molecules and even the ice’s crystal structure. By calculating the rocketlike push on ‘Oumuamua if it were made of ices such as nitrogen, hydrogen and water, “we learned that nitrogen ice would work perfectly well,” Desch says.

Because nitrogen ice covers outer solar system bodies such as Pluto and Neptune’s moon Triton, but not smaller objects like comets, ‘Oumuamua is probably a chip off a Pluto-like exoplanet, the researchers report.

To determine how realistic that scenario is, Jackson and Desch calculated how many chunks of nitrogen ice could have been knocked off Pluto-like bodies in the early solar system. Back then, the Kuiper Belt of objects beyond Neptune was much more crowded than it is today, including thousands of Pluto-like bodies iced with nitrogen. But some 4 billion years ago, Neptune’s orbit expanded. That disruption caused many Kuiper Belt objects to collide with each other, and most sailed out of the solar system altogether.

Under such chaotic conditions, collisions could have broken trillions of nitrogen ice fragments off Pluto-like bodies, Jackson and Desch estimate. If other planetary systems throw out as many shards of ice, those objects could make up about 4 percent of the bodies in interstellar space. That would make seeing an object like ‘Oumuamua mildly unusual but not exceptional, the researchers say.

“When I first started reading it, I was skeptical … but it does tick a lot of the necessary boxes,” says Scott Sheppard, an astronomer at the Carnegie Institution for Science in Washington, D.C. not involved in the work. “It’s definitely plausible that this could be a fragment of an icy dwarf planet.” But plausible, he notes, does not necessarily mean correct.

‘Oumuamua is now too far away to confirm this idea with more observations. But the upcoming Vera Rubin Observatory and European Space Agency’s Comet Interceptor mission could detect more interstellar objects, says Yun Zhang, a planetary scientist at Côte d’Azur Observatory in Nice, France not involved in the research. The Vera Rubin Observatory is expected to spot, on average, one interstellar visitor per year, and the Comet Interceptor spacecraft may actually visit one.

Getting a closer look at more of these objects could narrow down which possible explanations for ‘Oumuamua are most reasonable, she says (SN: 2/27/19).