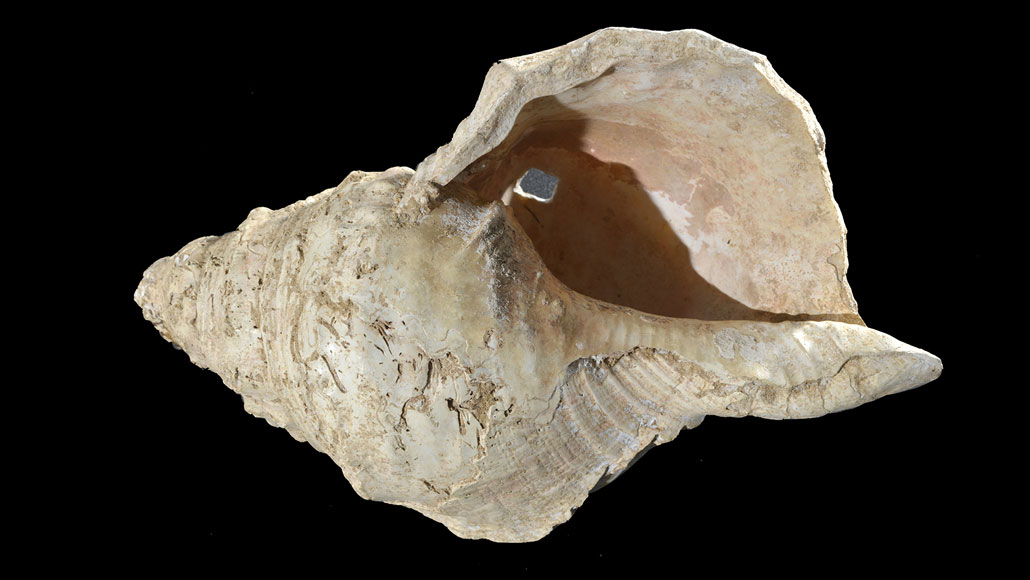 Humans made a horn out of a conch shell about 18,000 years ago


Ancient Europeans made a horn out of a large seashell and blew musical notes out of it roughly 18,000 years ago, a new study suggests. While it’s not known how ancient people used the shell horn, conch shells in historical and modern cultures have served as musical instruments, calling or signaling devices and sacred or magical objects, researchers say.

People played the marine horn inside Marsoulas cave, located in the French Pyrenees, say archaeologist Carole Fritz, of the University of Toulouse in France, and her colleagues. Wall paintings inside that cave depict humans, animals and geometric forms. Discoverers of the conch shell at the cave’s entrance in 1931 thought it had been used as a shared drinking container.

But microscopic and imaging examinations indicate that someone cut off the shell’s narrow end to create a small opening, the scientists report February 10 in Science Advances. A cylindrical mouthpiece, possibly a hollow bird bone, was inserted in the hole, they suspect. Brownish traces of a resin or wax around the artificial opening may have come from a glue for the mouthpiece.

Images of the shell’s interior revealed two holes that had been chipped into spiral layers just beneath the opening, likely to hold the mouthpiece in place. By using a metal mouthpiece and blowing into the shell’s artificial opening, a musicologist and horn player enlisted by the researchers produced sounds close to the musical notes C, C sharp and D.

Red pigment marks shaped like human fingerprints dot the inside of the shell, near its wide opening where someone trimmed the edge. If the shell horn was used as a musical instrument, it’s certainly not the oldest. That honor goes to bone and ivory flutes that Europeans made as early as around 40,000 years ago (SN: 6/24/09).